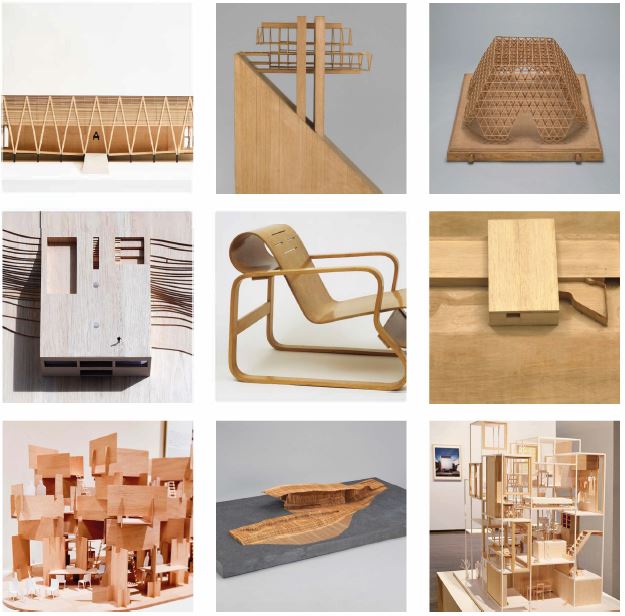 Wood comes from trees, and so its qualities depends on them.
It’s an orthotropic material, not having uniform mechanical and thermal properties in every direction. Different kinds of wood can vary in:

The most used part of the tree is the trunk. It develops concen­trically as rings, one a year, around a central pith. As any living being, it’s composed by cells, elongated ones. Their size and proportion depends on the tree, but they’re usually longi­tudinal, with axes oriented vertically in the tree trunk. The direction of the dominant longitudinal cells in a tree is called grain – which is usually accompanied by an adjective that defines the quality of the wood.
There are also rays are positioned in the oppo­site direction of the dominant cells, the ones that provides the conduction of sap. During winter, the cell contents thicken, what makes the cambial layer stiffen and become less
vulnerable to mechanical damage. If the tree is cut the bark typically remains firmly attached – this is ideal when it’s desired. When it isn’t desired it’s ideal is to cut during the growing season.

Name
Vary between Softwoods (coniferous) and Hardwoods (angiosperms or monocotyledons)

Chemical Formula
Wood does not have a chemical formula because
it is not composed of a single compound. Any piece of wood was at one point part of a living biological structure – a tree. 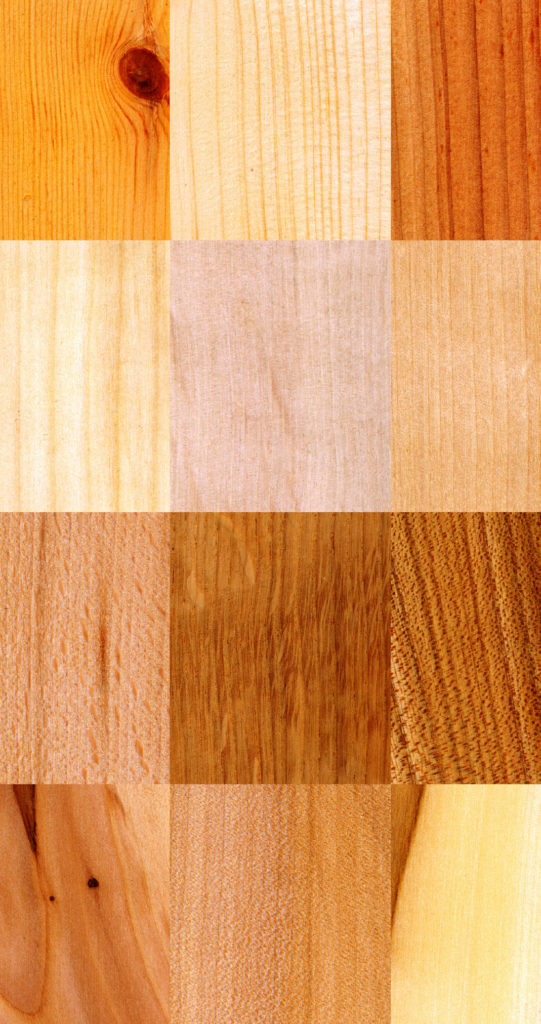 The old wooden structures in Japan were built without any kind of metallic element in the connections between wooden elements, only wooden fittings and notches. The use of wood was not only due to the fact that it was a resource available in the country and able to absorb earthquake impacts, but also due to its structural potential.
There is a basic system of joints and variations
can be derived from this, composed of two modalities: the Shiguchi – in which the joints adopt more than one axis, and can be two-dimensional (x+y, x+z and z+y) or three-dimensional (x+y+z) – and the Tsugite – only one axis.

For the first treatment of wood, the Chouna or the Ono is used, which is similar to the hammer and is used to peel or remove large quantities of wood. Kanazuchi e Kizuchi are kinds of hammers. Nomis are used in conjunction with hammers. The Sumitsubo, it is a tool used to help mark the cuts that will be made in the wood. The Kebiki serves to make grooves in the wood parallel to the side where it is being supported in order to facilitate the support of the saws. The Nokogiris and Kanna are the Japanese saws. Finally, Sashigane is a steel square.
However, with the emergence of industrialization and mass production of steel, this traditional method was increasingly forgotten. In contrast, while computer-controlled machines are getting closer and closer to carpentry shops, the way
wood pieces are joined together in a con­struction is now achievable through new technologies. 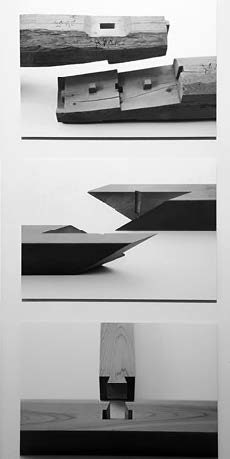 Wood bending is an ancient craft mainly used for shipbuilding or musical instruments. In the middle of the 19th century, the German furniture maker Michael Thonet developed a method for solid wood bending. The main problem to solve was to compress the inside of the wood without breaking the the outside which is being stretched. The Thonet method uses a metal strap to support the wood on the convex side to stop the breaking.
Three major stages have to be passed for this method of wood bending. While softening, the wood is exposed to a steam atmosphere and heated up to at least 80°C ranging a wood moisture content from 20% to 25%. The influence of moisture and temperature makes the wood flexible for bending. The steaming time depends on the species, moisture content and thickness of the wood.The wood gets in shape during the bending procedure with the perfect fitting strap on the outside.
After placing the strap, the steamed wood has to be inserted immediately in to the bending machine to be bent around the mould fixed to the bending machine. To avoid the spring back during the following viscoelastic state, the wood has to be fixed to its position until internal bending forces have settled. The bending process takes approx. 20 – 40s. After bending, the parts are kept in the
strap for 60 – 90 minutes, then dried. 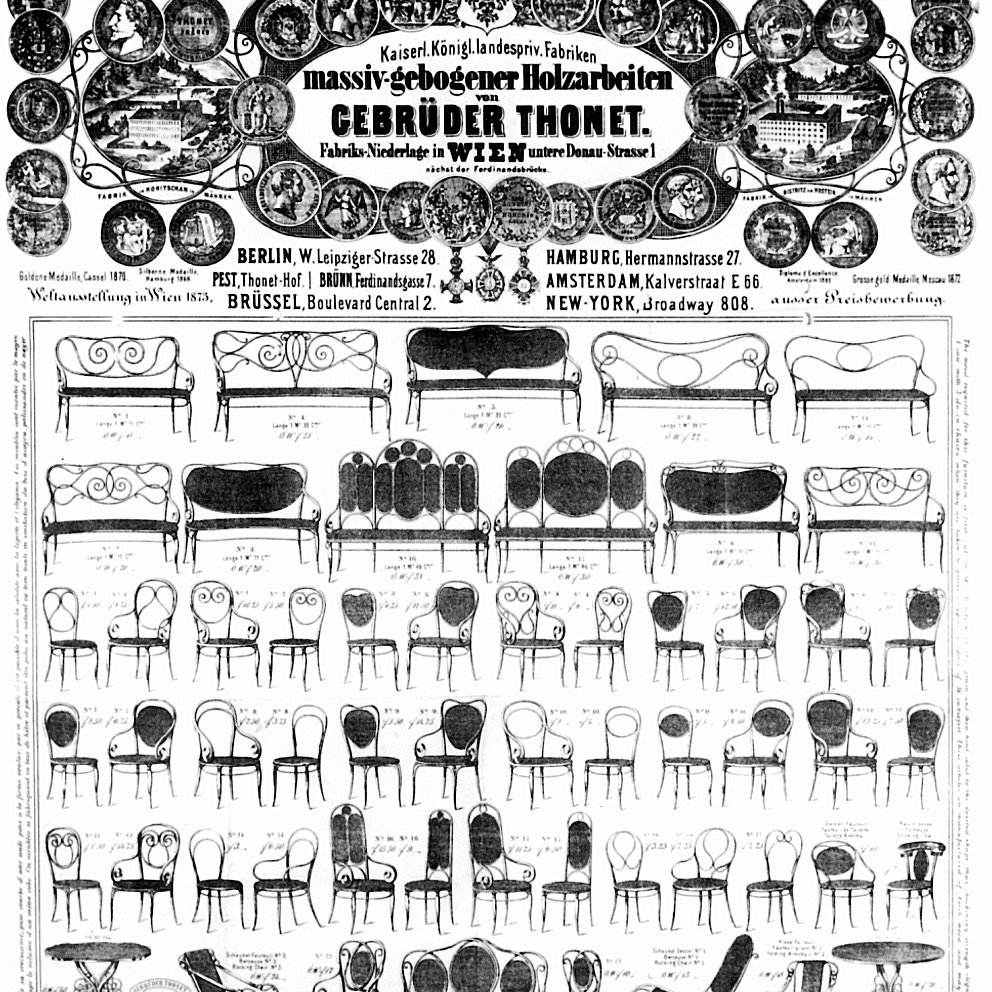 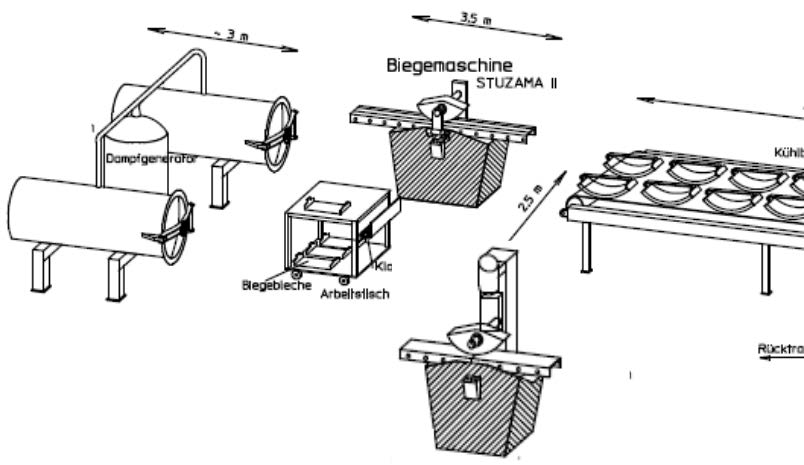 In a study researchers from ETH Zurich and Empa presented a new technique which bends wooden panels into a pre-set shape without the help of mechanical shaping processes. The potential lays on the natural swelling and shrinking of wood caused by the moisture content of the material.
They take advantage of this characteristics by gluing two layers of wood together so that their grain directions are opposed to each other. Depending on the thickness of the layers, the orientation of the grains and the moisture content the way of deformation can be calculated with the help of computer modeling.

Techniques
Wood that bends itself into shape 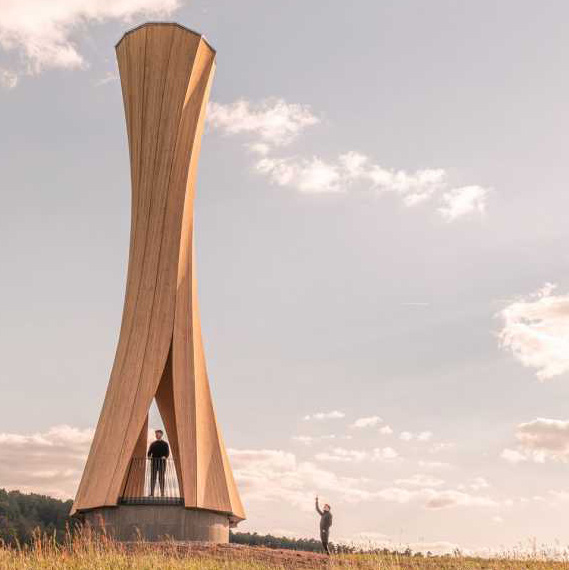 The chair tested the limits of plywood bending and manufacturing in the early 1930s. It consists of two closed loops of laminated wood, forming arms and legs. Between them is the seat: a thin sheet of plywood bent at both top and bottom, what provided overall resiliency.
It was designed to a tuberculosis sanatorium, with the intention of help sitters breathe more easily by the angle of the back of the armchair.
In 1935 the company Artek was established in Finland to mass-produce Aalto and his wife designs, most of which remain in production. 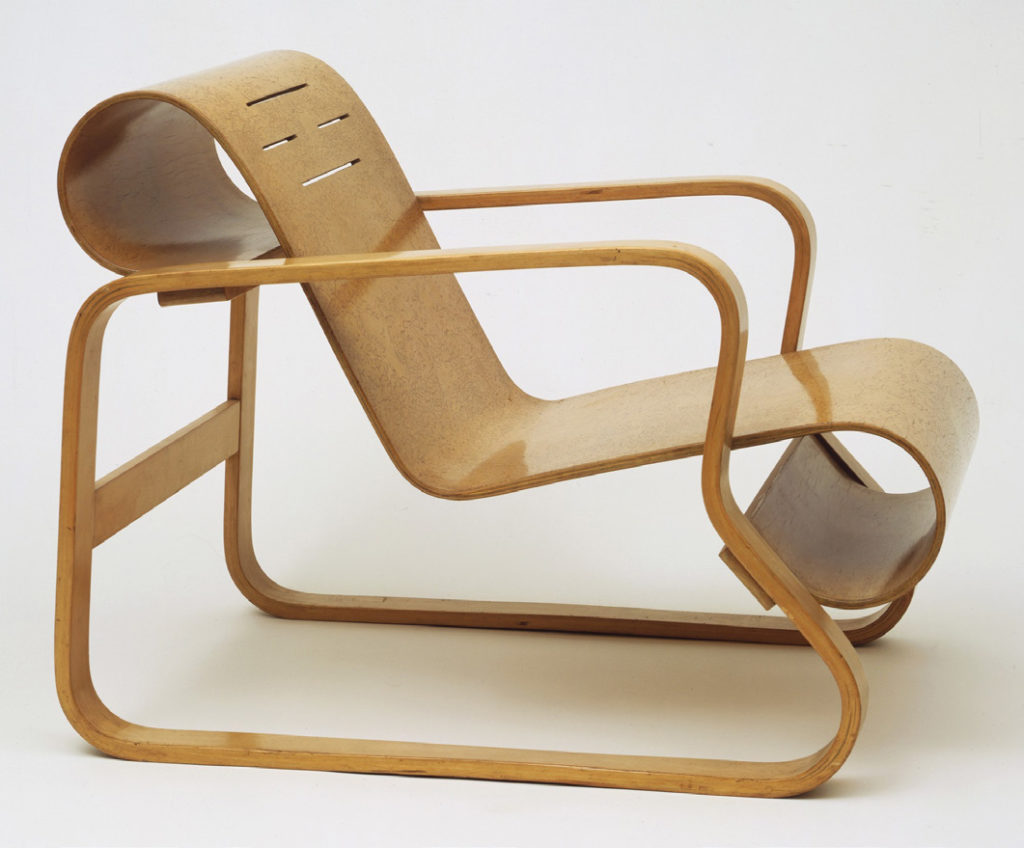 Example: House of the infinite

Balsa wood building models are often used as a rough draft of the general design vision that the architects have in mind, and it also helps to emphasize the topography and landform in many cases.
Therefore it is probably the most popular wood product for model making. Balsa wood is one kind of hardwood with a nice finish and texture. It is available in varying weights, easy to cut and creates a very accurate model. It can be cut, painted and sanded easily.
However, because of his fragility it always leads to material wastage. It is one of the building model making materials used mainly to make the structure and the frame of the building. Balsa strips can be used for structures with the wooden skeleton, or to show trusses. Because Balsa is soft, there is a general conception that it is easy to work with. That is both true and false. On the one hand it is easy to cut and to shape, but on the other it can be difficult to smooth. Balsa end grain tends to fuzz.
For model making, balsa has to be stick together. Many different glue types have been developed for balsa wood and come in a range of viscosities for different applications. As it is very soft, a craft knife can be used to cut the balsa. Sandpaper and files are also helpful things for finishing. Like foam board it’s possible to scratch build with balsa wood. 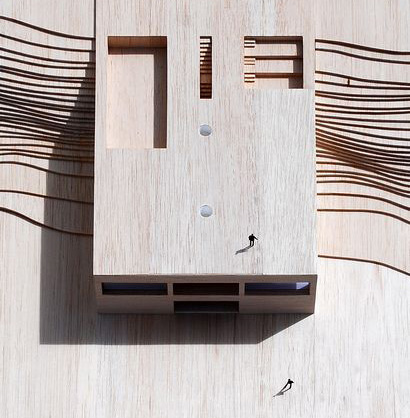 ETH Zürich, Building with wood that bends itself into shape, https://ethz.ch/de/news-undveranstaltungen/eth-news/news/2019/09/selbst-formendes-holz.html, 27-05-2020.